Among 11 subcategories, eight experienced monthly increases, with the largest increase registered in softwood lumber prices, which rose by 27.4%. The price of softwood lumber is up an astonishing 81.2% over the past year, a reflection of supply chain disruptions combined with the rapid expansion of single-family homebuilding. Natural gas prices were 12.1% higher than the previous month, while crude petroleum and unprocessed energy materials, were down 9.8% and 0.7%, respectively. Steel mill products was the only other subcategory in which prices declined in September, falling 0.1%. 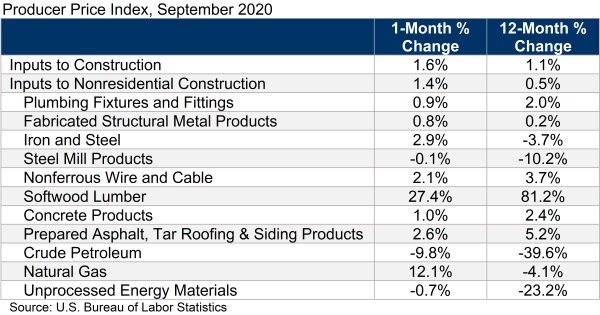 “Rising materials prices represents yet another risk facing nonresidential contractors going forward,” said ABC Chief Economist Anirban Basu. “For months, many contractors have expressed concern that global supply chain disruptions would produce a combination of materials shortages and rising prices. Indeed, many contractors have reported occasional issues procuring necessary inputs to production, further slowing construction service delivery. This has been reflected in ABC’s Construction Confidence Index, which showed a mere 23% of contractors expect their profit margins to expand over the next two quarters. But in general, materials prices have not raced higher as feared with the noteworthy exception of softwood lumber.

“That may be changing,” said Basu. “Materials prices expanded nearly 2% in September and are now higher than they were at the same time last year. Despite the lingering pandemic, the global economy has been recovering, increasing demand for key commodities. Rapid viral spread, including in Europe and parts of North America, render materials shortages more likely during the winter months. Were Congress to pass a stimulus package under current conditions, especially one offering a meaningful infrastructure component, materials prices could rise even faster.

“But fears of persistently rising materials prices may be overblown,” said Basu. “For now, Congress is not focused on passing a near-term stimulus. The pace of economic expansion has been softening recently, and the global economy is poised to slow during the winter months as economic shutdowns have begun to reappear. All of this suggests potentially softening demand for materials during the months ahead, which would help to suppress rapid price increases.”